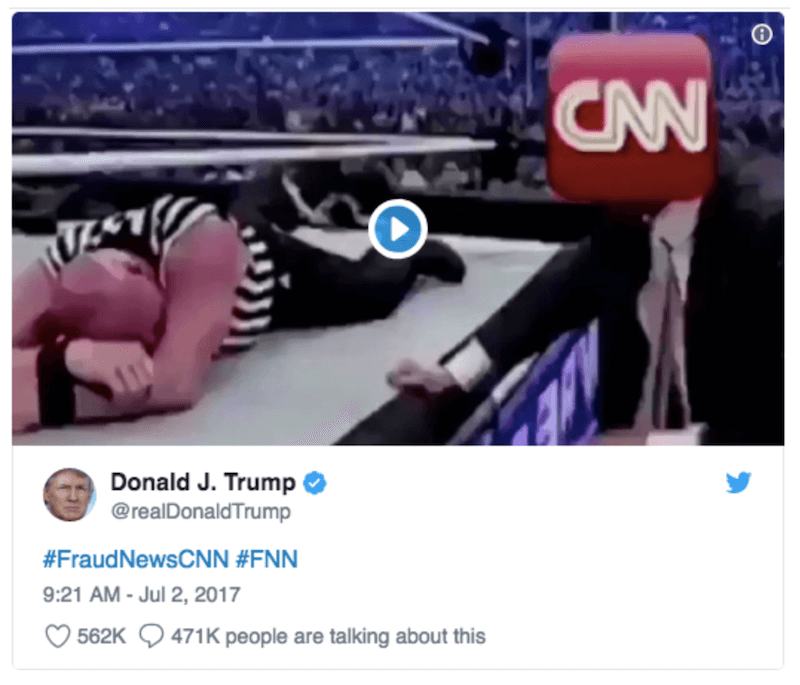 In the lead up to the 2018 Midterms, our data team decided to analyzed over 16,000 of Donald Trump’s tweets from 2015-2018 to understand for the first time the changing sentiment of his base across a range of 50 topic areas. Our analysis shows the following: Our analysis additionally implies that President Trump and his team would have been able to consistently survey a base of followers at a level that has never been done at this scale before in politics. This could also allow interest in new policies and engagement to be tested and help suggest what issues the Trump administration should focus on to motivate and engage his base. The chart below illustrates how the topics that the base of Donald Trump are most focused on (retweets show positive endorsement). Note that immigration is the fasted growing topic leading up to the midterms. 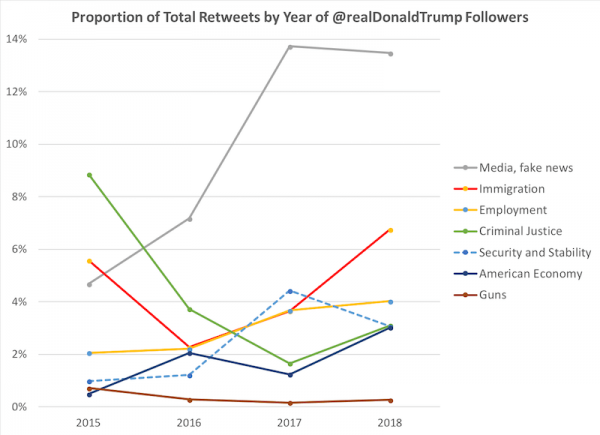 The increase year or year of President Trump’s twitter follower base shows a ten times jump between the end of 2015 and October 2018, the biggest increase coming once he became President. Today, over 17% of the users on Twitter follow @realDonaldTrump. 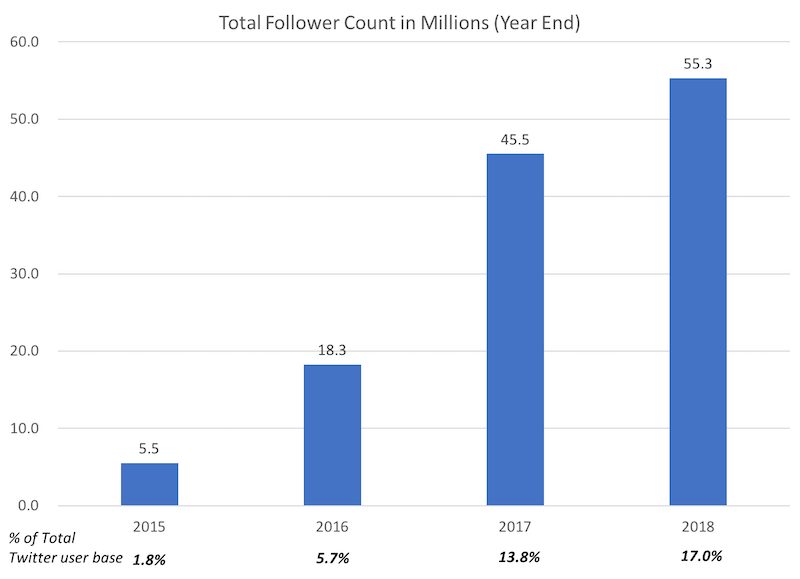 Before we review the content of the tweets, we’ll first summarise President Trump’s overall behaviour. We’ve seen a sharp drop in the number of tweets per year. 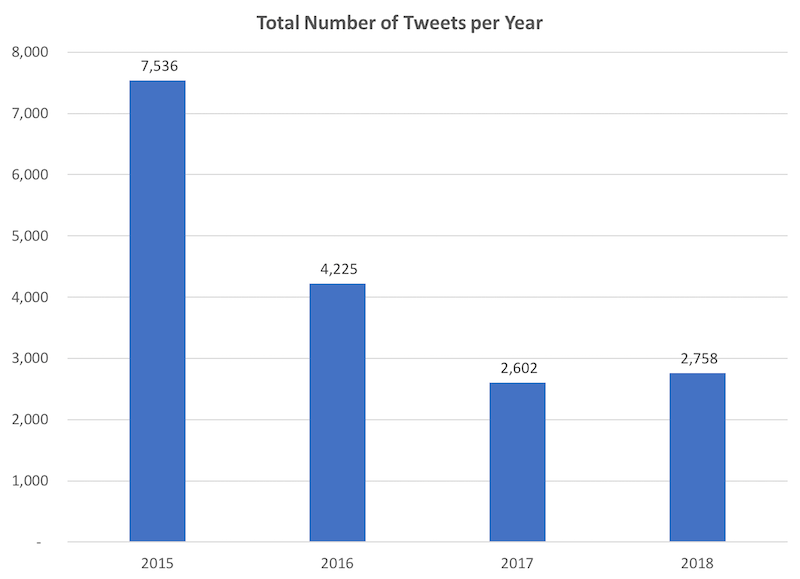 This is driven by two factors. First, we see fewer tweets per day and second, in late 2017, Twitter increased the maximum number of characters per tweet from 140 to 280. This led President Trump to write about 40% longer tweets. 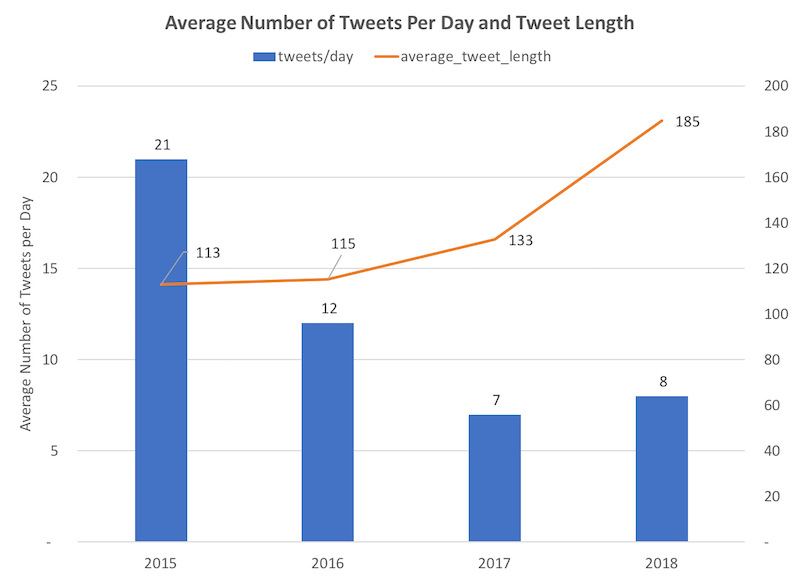 In this analysis, we have chosen to focus on retweets as the simplest metric of positive engagement and replies of tweets as the metric for negative sentiment. This is based on previous work in the area including the the ratio of the two measures. Replies/Retweets and is known as “The Ratio” (see Esquire and FiveThirtyEight sources) and shows the balance of sentiment, greater than 2:1 points to a negative sentiment. We acknowledge there are many different methods for how to measure engagement on Twitter and we cover some of the alternatives in the Appendix. Our first chart shows how much the activity of the followers of has grown. This is largely driven by the increase in the total amount of followers as shown in the chart above as well as the breath of followers. 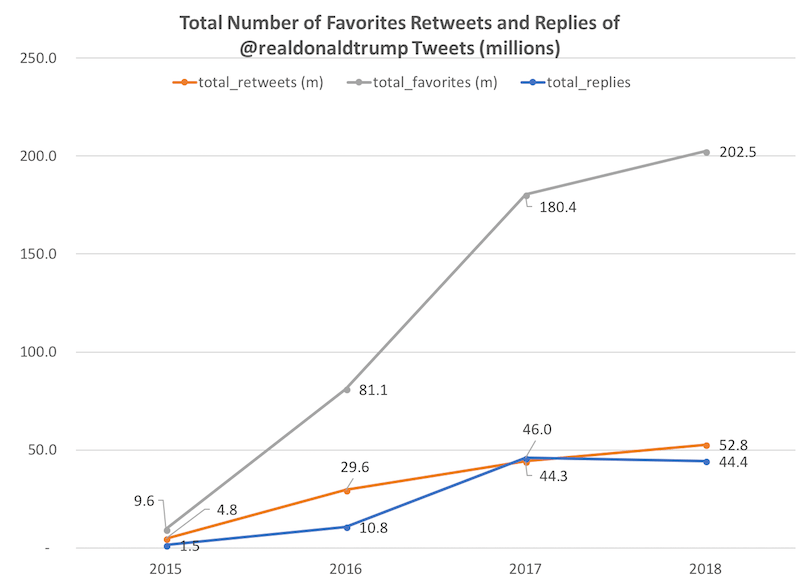 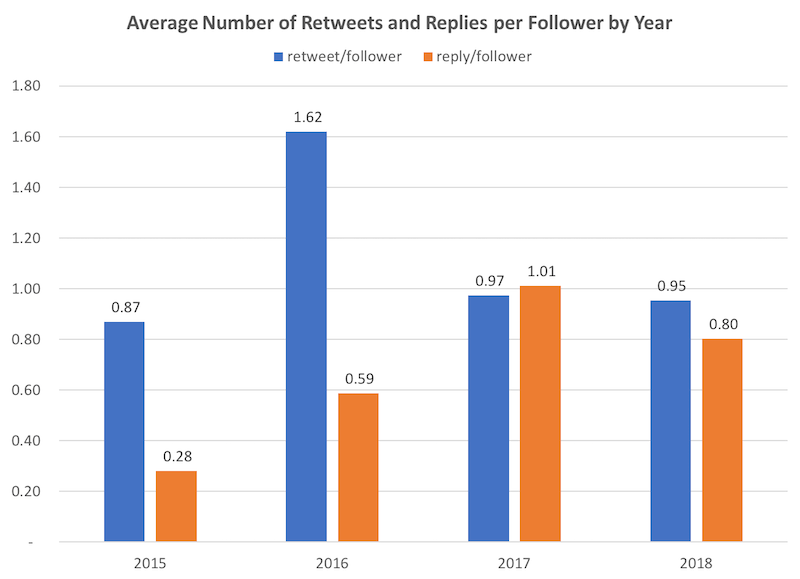 We can also see from the chart above is how active the follower base was during the election year of 2016 with a much higher proportion of positive engagement per follower. As the number of followers has grown larger and presumably broadened, the balance of negative responses (ie replies) increased significantly too.

We have focused on three metrics in the analysis that follows:

Out of the total number of 7,536 tweets in 2015, the most common topic was Campaigning/Rallies. Within that year, 4.3% of tweets were about promoting the Trump brand or Trump products. 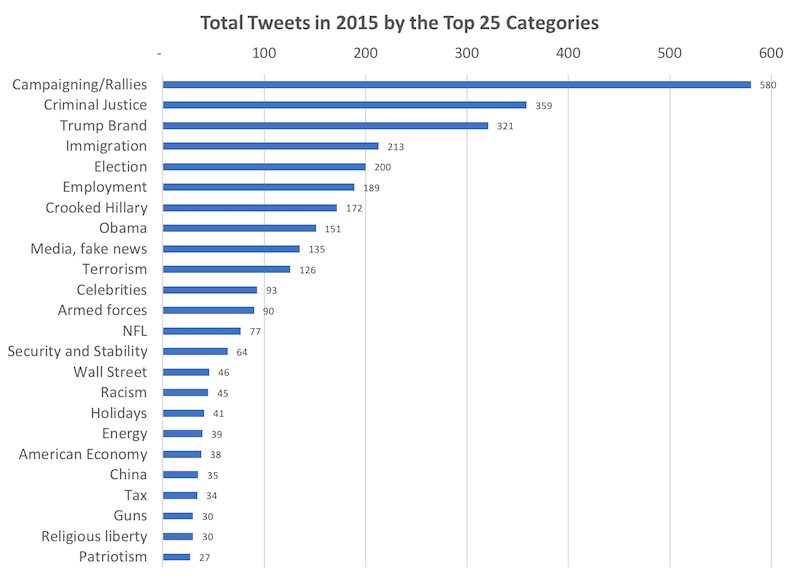 By next looking at the average number of retweets for these top 25 categories, we can see which areas the base (followers) were most engaged about. 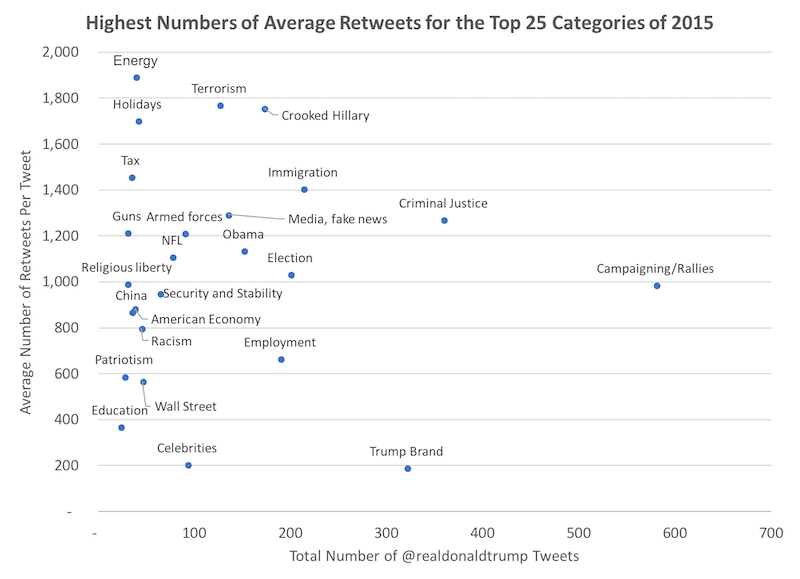 Energy, terrorism and Hillary Clinton were already the topics driving a lot of engagement in base back in 2015. We are not surprised to see the least engagement for re-promotion of Trump Brands which is at the bottom end of the chart (although a very active area for President Trump).

In 2016, the total number of tweets began to significantly decline, dropping 44% from 2015. As well as this, we see slightly different topics making up the Top 25 topics President Trump focused on. 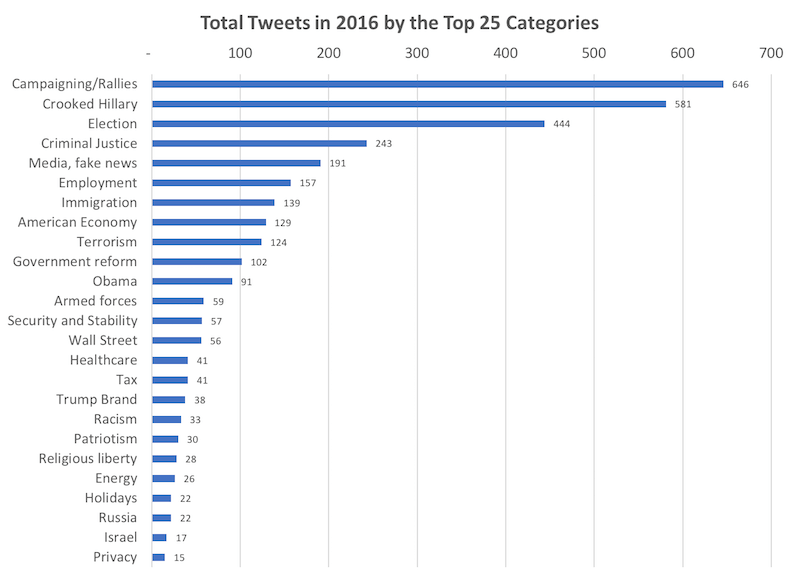 New topics also enter more of the conversation such as Israel and Russia. 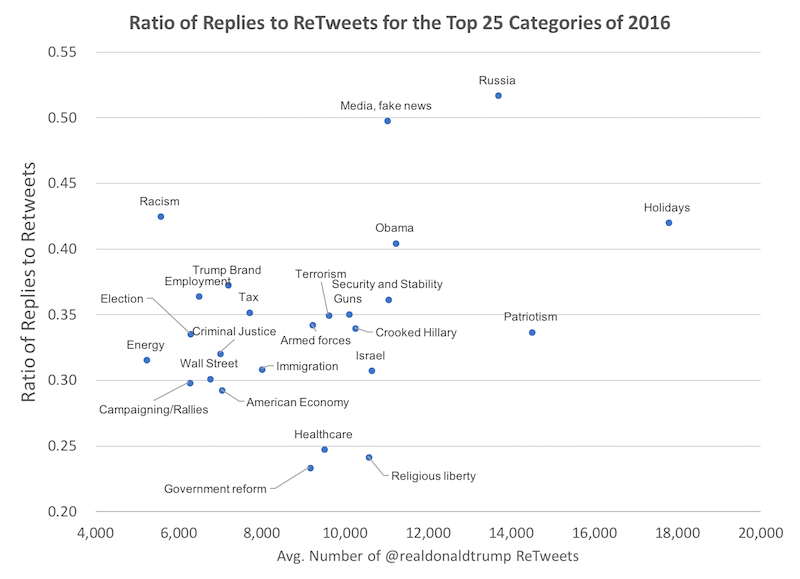 *”Holidays” as a category refers to tweets related to various holidays, e.g. “Merry Christmas!” and “Happy New Year!” *”Racism” refers to references to the historic Civil Rights Movement and important figures from the movement, including Rosa Parks and Martin Luther King Jr. For 2016 will President Trump focused on the election, we move the analysis to look more at sentiment of the followers. The x-axis of our charts continues to look at our metric for positive engagement, average retweets, but the y-axis looks at The Ratio of replies to retweets to assess sentiment. As can be seen from the chart above, there are a number of topics that the base of President Trump (not yet President for these tweets) were most engaged about. Patriotism, Russia, Security, Religious Liberty and Israel. The continued focus on Crooked Hillary was by far the most retweeted area, 6,429,891 in total throughout the year. The most retweeted tweet of the year was:

In 2017, the total number of tweets falls again, this time by another 38%. The conversation changes again, the most well known increase coming from that of the “fake-news/media” lexicon. Employment, tax and healthcare all enter the conversation as key areas of policy focus. 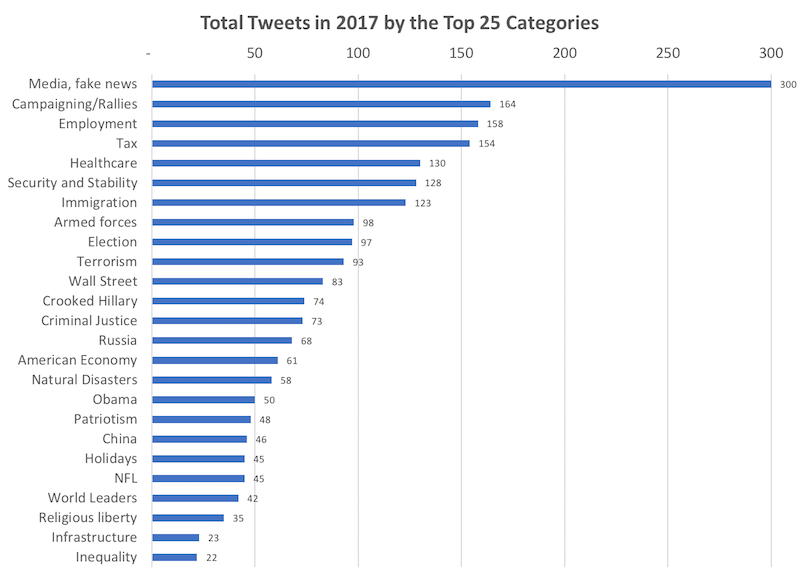 Looking to where the base was most engaged on in 2017… 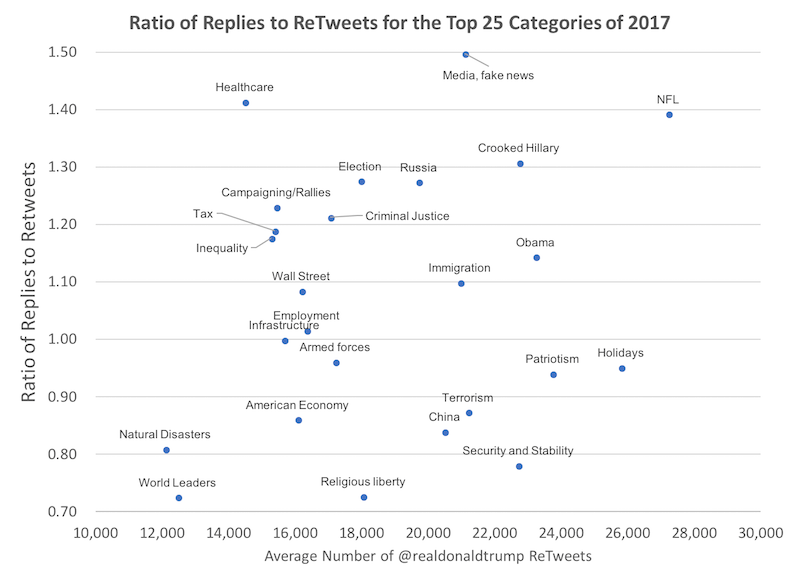 In 2017, the most polarising topics (ie highest ratio of replies to retweets) was media/fake-news and healthcare, the former a highly engaged positive issue for the base. China also enters the conversation in 2017.

2018 saw a 5% year on year increase in the number of tweets but 2018 was also the first full year after Twitter extended it max character length for tweets so fewer tweets were needed to make the same point. A lot of the same topics in 2017 can be seen at the top of most tweeted list for 2018. 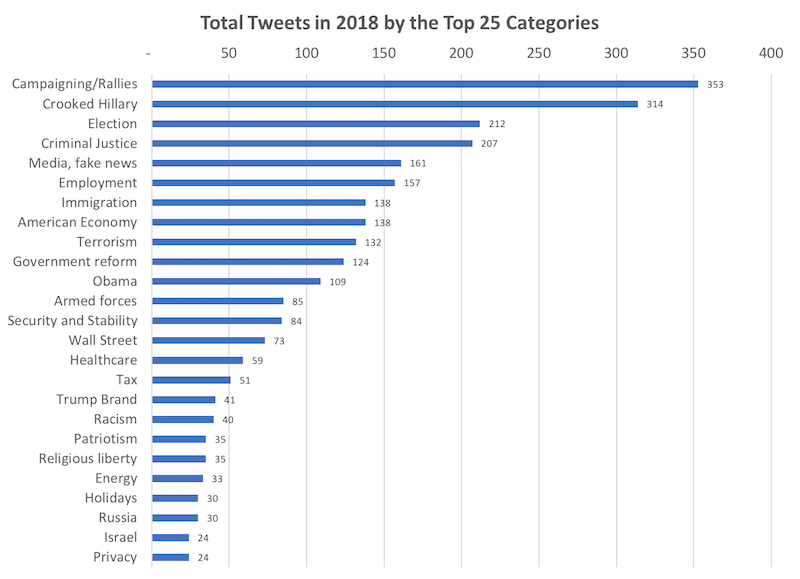 What we do see is a different set of hot engagement topics in 2018 with terrorism moving up to the top and the Supreme Court moving up as well. 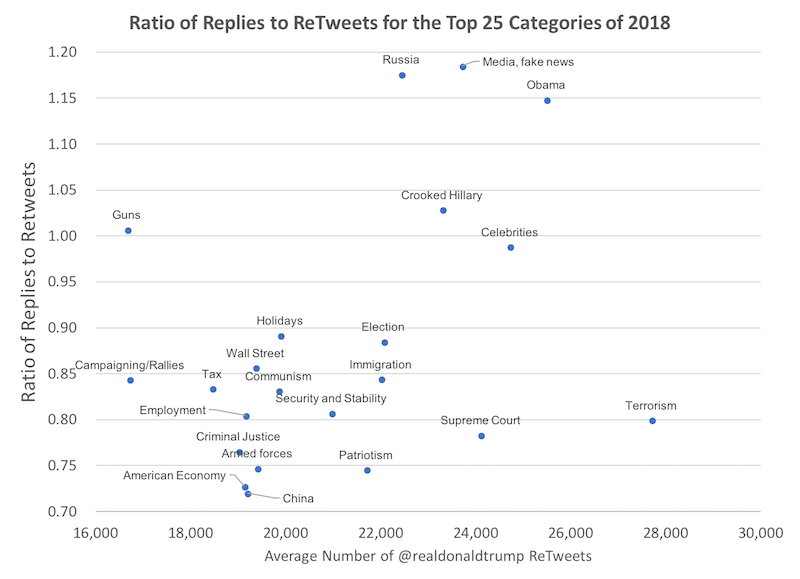 It is also worth looking at how President Trump has changed the style of the conversation over time. 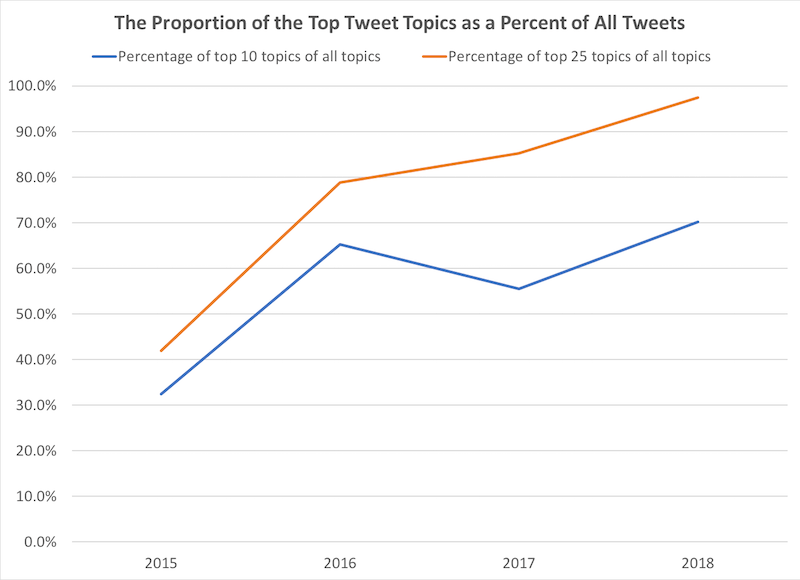 From 2015 to 2016, as we would expect, there was a big jump in focus. The efforts spent on the top 10 topics has remained relatively steady but what has changed is overall focus. Of the 50 topics we have categorised, the top 25 for 2018 accounted for nearly 100% of all the tweets. President Trump has found the topics he and his base care about most and these are what time and effort is being spent on. Additionally as President Trump was a private citizen and not actively campaigning for parts of 2015, we would expect to have seen a broader range in that time. We can also see that of the top 10 topics that President Trump focused on 2015, seven have remained as focus issues. 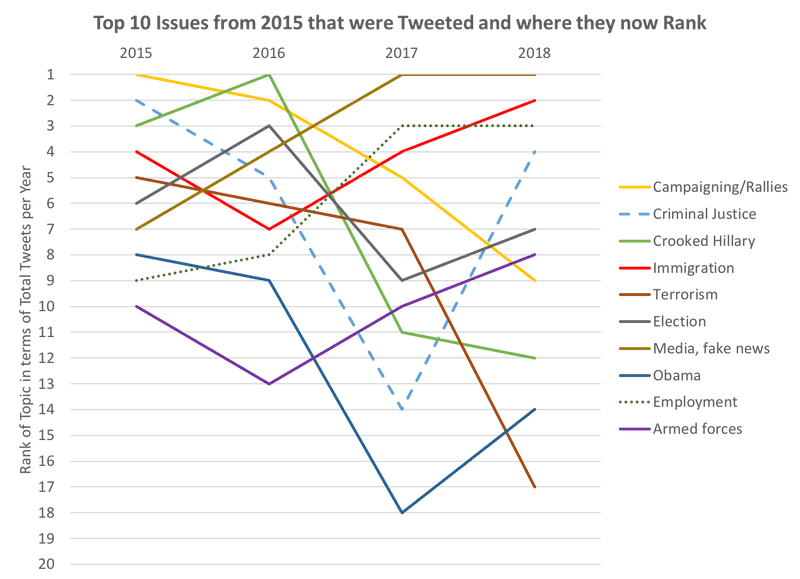 How the Base has Responded over time

How much have the 2015 issues remained a focus?

The issues that President Trump focused on 2015 have become less and less important to the base over the last four years as positive engagement has declined for nearly all of the hot topics of 2015. 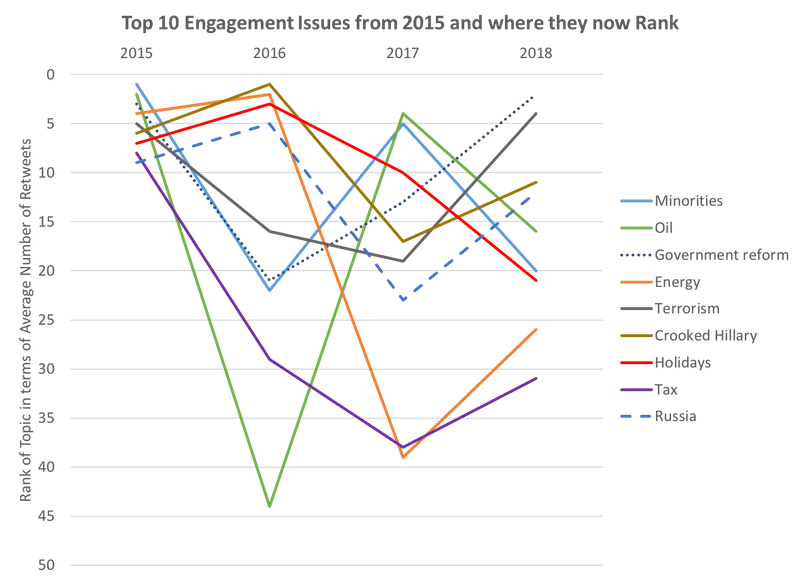 *”Minorities” refers to the Black Lives Matter movement and related commentary How sentiment has changed leading up to the Midterms We’ve looked at the Ratio or replies to retweets of major topics through 2018 to see how sentiment has been changing. 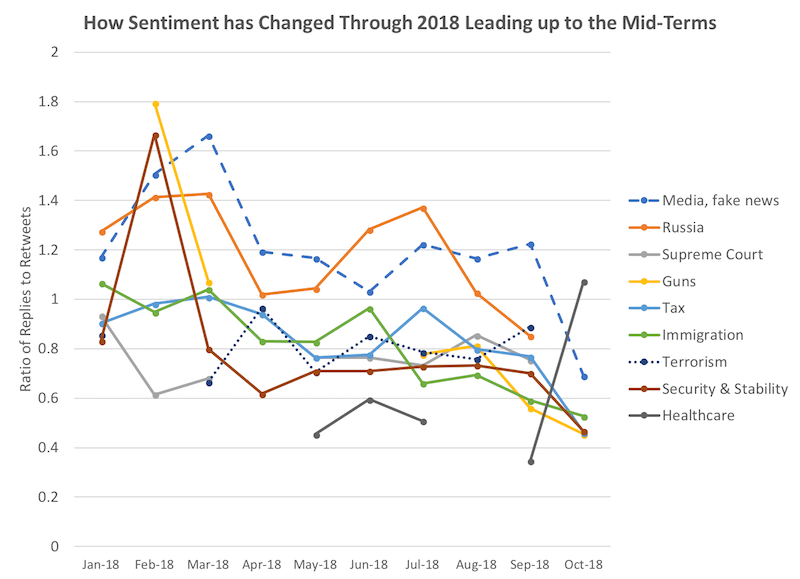 The most polarising topics leading up the midterms through 2018 have been media/fake-news, Russia and at different times, immigration and the Supreme Court. Most recently in October 2018, healthcare has jumped up as a more polarizing topic. We will be watching closely to see how the final days of campaigning are responded to on Twitter.

To measure engagement, we have focused on retweets as, a retweet shows the most engagement from the audience compared to a like or reply. We accept there are many other methodologies to measure engagement on twitter, including weighting likes, retweets and replies. To classify the tweets we created 50 categories from immigration to healthcare to Hillary Clinton and built a natural language processing model to work through over 16,000 tweets from Jan 1 2015 to Oct 25 2018. We were able to classify 80% of all retweets. The remaining 20% were typically on a range of unrelated topics and were not focused on by the base. Note our model allows for one tweet to be classified in more than one category. We used keywords and phrases to categorize the content of Trump’s tweets by a set of topics that Trump was likely to cover. Qualitative and quantitative analyses were used to refine and extend the wordlist, respectively. Frequency distributions were used to find several phrases that were then fed back into the model as keywords and phrases, indicating topics. We did not attempt to segment out or take any additional account of bots or any automated re-tweeting policies. This is best left to Twitter who we know have been working on this ongoing process and counts related have reduced in recent weeks. We have also assumed that Retweets is a positive endorsement of a message, following other articles on topic (see Sources). Sources: Twitter data as of 29 Oct 2018 http://cs.wellesley.edu/~pmetaxas/WorkingPapers/Retweet-meaning.pdf

Further analysis could also be done to look at who the retweeters and repliers were, what their followings are like and the language they used. Different methodologies on engagement and sentiment could also be looked at. © FXC Intelligence 2018

Valentina Vitali
Valentina is a Research Analyst at FXC Intelligence, with a passion for the payments and fintech world. Being curious by nature, Valentina enjoys getting to the bottom of things and understand the true drivers of companies and the market. In her work at FXC Intelligence, Valentina does this every day through the analysis of data and by creating stories around it. Before joining FXC Intelligence, Valentina completed a MSc in International Management at the University of Trento and worked in market research, focusing on payments.
LinkedIn
+
Sign In
+
Account Registration
By creating an account, you agree to our Terms and Conditions
+
Please enter your email address
We'll send you instructions on how to reset your password.
+
We use cookies at fxcintel.com so that you get the best user experience. If you continue to use our website we will take this as meaning that you agree to our use of cookies. If you want to find out more about cookies please see our cookie policy.