The cross-border payments sector continues to change. Over the last ten years, it has seen many new entrants, fueled by cheaper computing power, better technology and improved mobile capabilities (see our incumbents versus challengers map).

Few of the challengers have reached the scale of the incumbents and even fewer are profitable. This has meant there have been scant opportunities for Private Equity (PE) to invest in the space, as they typically look for companies with positive cash flows and meaningful EBITDA to underpin an acquisition. 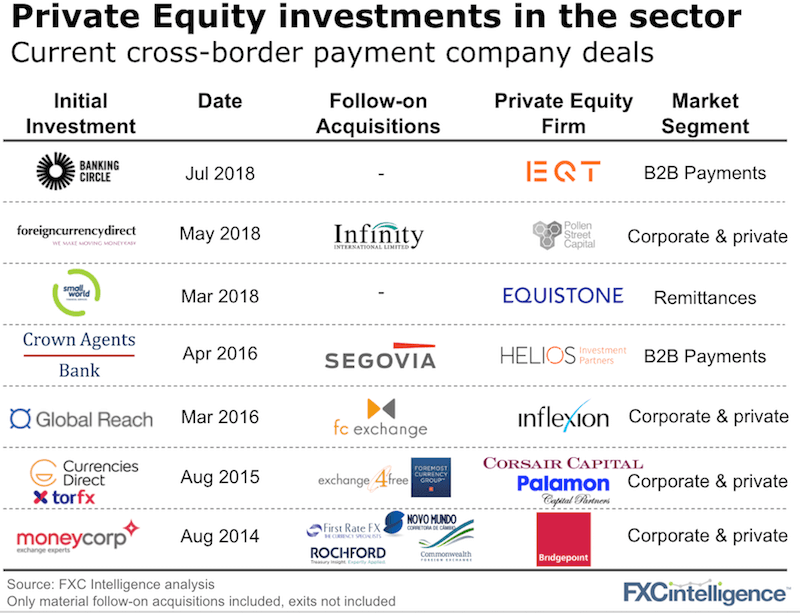 As the companies within the sector mature, we would expect more PE deals to occur. But don’t be surprised if you see a few more tangential products and capabilities led deals too.

I was in New York this week for Citi’s Fintech conference. Mostly aimed at investors, the tone was very different to the big industry conferences such as Money20/20. I’ll keep it to three thoughts

1) Blockchain is finding (a little) scale

Whilst blockchain may not be as hot as it was, we are beginning to see real companies use it for real transactions. To that end, I spent some time talking with Alex Holmes, MoneyGram’s Chairman & CEO, and Kahina Van Dyke, Ripple’s SVP of Business Development. MoneyGram is now live with Ripple in six corridors and Ripple accounts for c.10% of MoneyGram’s US-Mexico flows.

MoneyGram’s treasury department is where the value is right now. In its simplest terms, MoneyGram is able to reduce its FX exposure as it can now buy the currency it needs the same day versus a day in advance. Not life changing but meaningful, especially for more volatile currency pairs.

Scale is still a challenge for most corridors as deep liquidity is needed in XRP, Ripple’s cryptocurrency, for the company to offer their full product. Effectively, this means a major exchange in each country needs to offer XRP (Bitso in Mexico for example offers USD to XRP and XRP to MXN).

Not everyone is fan though. Raj Agrawal, Western Union’s CFO, simply stated in an earlier panel at the conference that blockchain had yet to deliver material settlement efficiencies for Western Union in terms of cost, speed or transparency. Ouch.

But MoneyGram, Alex and Ripple are undeterred to make MoneyGram lead in the adoption of blockchain at this early stage. As Alex said to me:

“When the money moves with the data, that’s when the magic happens”

2) Data as the value connector

A number of payments companies have been building up large customer bases and have visibility over much of their customers’ payments. They are now focusing on mining that data to develop new products.

Smarter lending decisions have been one of the most popular data-enhanced products to emerge, whether it’s Payoneer‘s working capital product or Tradeshift’s supplier financing. Both want to use the data on past customers’ behaviour to extend favourable (and lower cost) credit. And, more importantly, they want to be proactive to offer credit to the right customers, rather than waiting for a customer to request it. Using data to reduce fraud remains key too.

3) Licenses as a value creator

The value of obtaining licenses, especially in more challenging emerging markets, remains a goal of many companies and is seen as a barrier to entry. We’ve also seen this drive a bank’s decision to partner with a fintech to reach these countries, as a cheaper and faster go to market option.

OFX reported their first half results this week. Some challenges and some highlights. 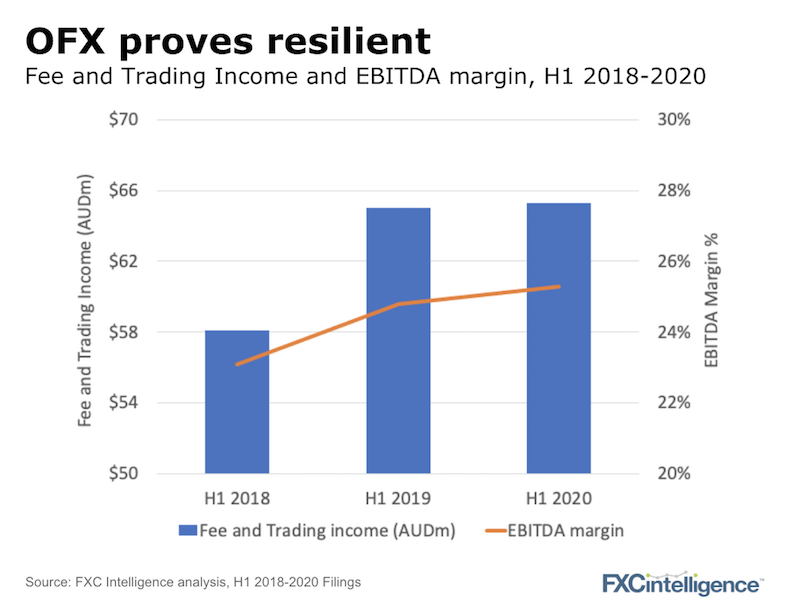 Revenue in North America, OFX’s key growth market, was up 19% and their corporate business grew revenue over 9%, despite global spot volumes declining. Brexit and the US trade war continues to be a headwind though.

Finablr’s results continue to improve. Revenue was up 9% and EBITDA 22% year on year. B2B remains the jewel in the crown with three new deals announced in October alone (Samsung, Airtel Africa and China Union Pay).