Forecasting the future of the sector

How are the different segments of the market likely to be impacted in the short and medium term? We’ve talked to many of you and we summarise our thoughts below: 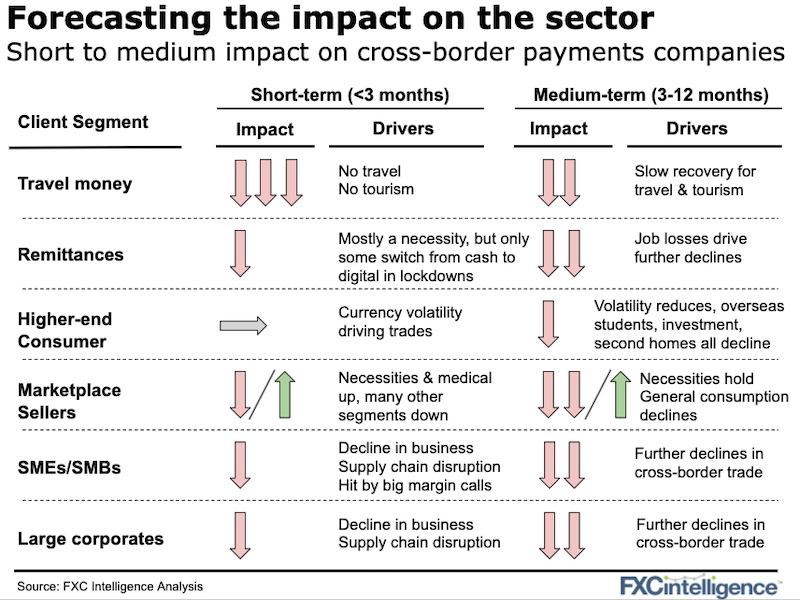 We apologise – there is a lot of red in this chart. This is due to the majority of analysts forecasting a downturn and painful global recession. It is also clear that the drivers of this downturn are different from previous recessions but many of the implications will be the same.

There are a few bright spots:

The challenges of the market are going to force innovation and changes to business models. New supply chains will also be formed as countries emerge from the crisis at different times. Those who can adapt fast enough and were not too overstretched in the upturn can hopefully turn down the growth dial for a while and focus on profit and cash generation.

Survival, profit then growth are the new priorities. In that order.

Learning from the past

The cross-border payments sector was very different back in 2008/2009. None of the current challengers existed and there were only a few companies with scale outside of the banks. 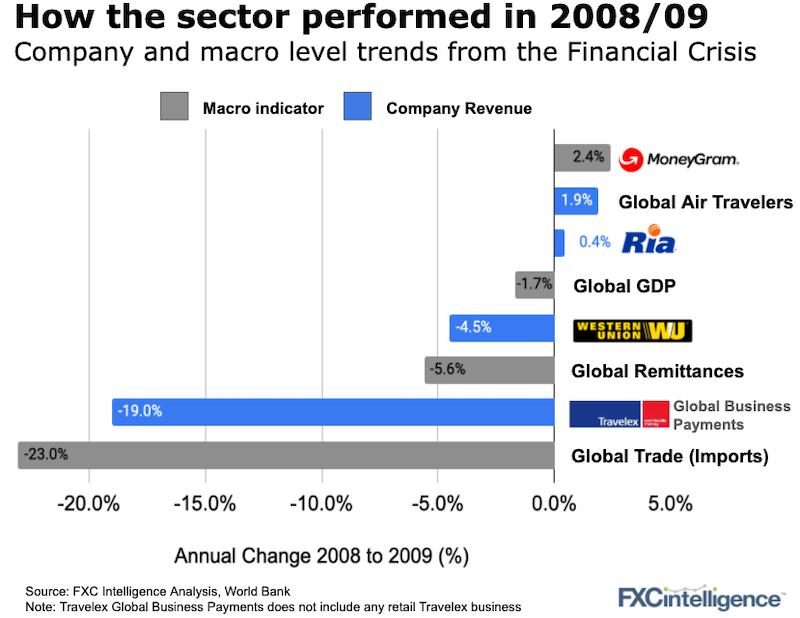 Some clear insights emerge from the data:

The players above represent the incumbents at the time. Many new players were emerging back in 2008/9 and were able to grow through the crisis but from relatively small revenue bases (e.g. Xoom, WorldFirst) or bucked the trend (Travelex retail). More on growth exceptions in future letters.

For the current core players in the sector, the message is clear. You will do well to outperform your underlying macro trends – whichever ones apply to you as outlined in the first section of the letter.

Unfortunately, some players are already under severe pressure and a few haven’t made it. We turn to that next.

Crunched by the crisis

The sector has already seen three players feel the brunt of the crisis. These are just the companies that have had to make a public announcement or have been forced to look for bankruptcy protection.

Finablr  – the collapse of travel and a liquidity crunch

The trouble started in January with a liquidity crunch which then turned into $100m of undisclosed checks and, most recently, into defaulting on a $300m loan. Its shares have since been suspended from the London Stock Exchange and insolvency options are being reviewed.

Two weeks ago, the Travelex retail business attempted to position itself away from the group. However, with the current collapse of the travel and tourism industry, it is unclear what market the company will be able to serve. This past week, it shut all its UK outlets.

EncoreFX and Alpha FX – too many margin calls

EncoreFX, the Canadian based corporate FX broker founded by Custom House’s founder Peter Gustavson, filed for bankruptcy protection this week. It simply stated: “a number of customers to whom the Company granted credit have defaulted on their obligations”.

Alpha FX, who reported both strong 2019 numbers and an expectation of a solid 2020 just a few weeks ago, is down by over 60% from its peak after reporting troubles with its hedging book this week. Covid-19 and the associated swings in the FX market have caused 223 of its customers to be hit with margin calls (Alpha had 648 customers as of Dec 2019). Most significantly, it reports: “One client faced with working capital shortages in its own business requires more time to settle its outstanding payment obligations of £30.2m to the Group.”

We hope all three companies are able to find ways out of their current difficulties and our thoughts are with those employees, ex-employees and their families having to deal with these difficult times.

Sadly, we do not expect this to be the last of such news in the sector. We wait to see how many other players are severely impacted by the current squeeze.