Big tech is making a big play into finance with plenty of recent news coverage (including in this week’s Economist featuring FXC Intelligence). We break down how this will affect the cross-border payments industry. Plus, insights from our pricing data in the UAE and after MoneyGram’s roller-coaster week, we take a look at the most volatile payments stocks.

The news has been recently filled with big tech announcing products and strategies aimed at the financial services space. Some directly at cross-border payments, some indirectly. There’s been a lot of fear-mongering going on too – we try to get to the bottom of what’s realistic and what’s not. 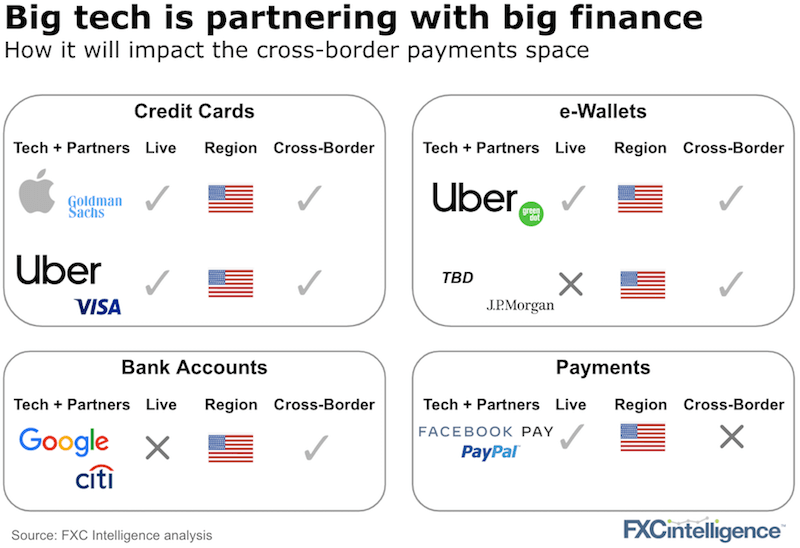 Big tech pushing into finance is not new but a renewed effort is certainly at play. Why?

Why big tech is pushing into finance

There are many reasons – the biggest as we see them:

Who could be most at risk?

Overall, most of the big initiatives are at an early stage or yet to launch. The US is the primary testing ground as it is a known market and home territory for the tech players above. Should you fear Visa and Mastercard even more given the acquisitions they have been making in the cross-border space?

Cross-border payments will be impacted either directly or indirectly by virtually all the initiatives shown above. To what degree, it’s too early to tell.

How volatile are public payment companies?

Last week was not for the faint hearted among MoneyGram’s shareholders. On 13 November, the stock fell almost 27% as its largest shareholder (private equity fund TH Lee) had a mass selloff via its limited partners. Two days later, MoneyGram announced some planned cost cutting at corporate in Dallas and the stock bounced back almost 10%.

Is MoneyGram the most volatile cross-border payments stock or was this just a busy news week? 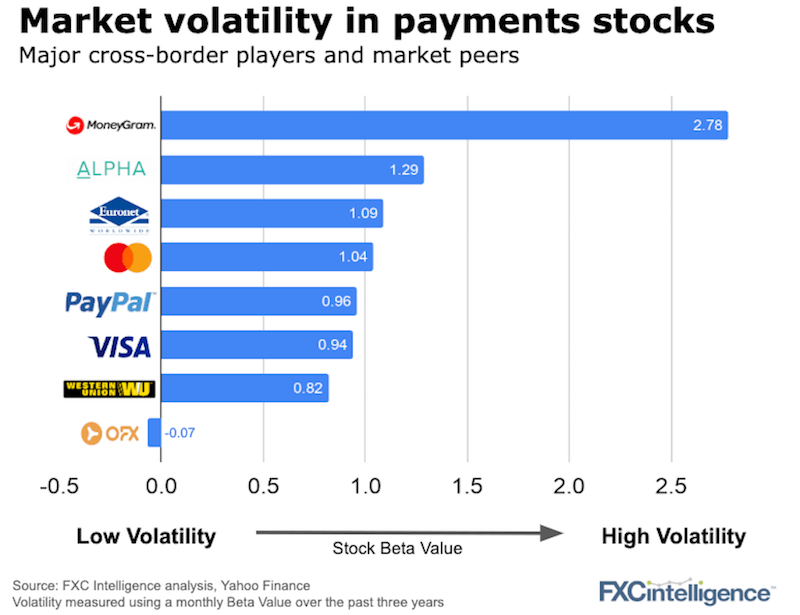 To answer the question, over the last three years, MoneyGram is far and away the most volatile stock amongst its peers.

Bill.com’s filing document for its planned IPO mentions the word “international” 32 times. For a company that was until recently just focused on solving US companies domestic payables needs, the planned IPO gives a good indication of where Bill.com is going.

As we’ve covered previously, Bill.com competes with a range of other players in the small and medium sized businesses (SMEs) payment simplification area (e.g. Veem, Tipalti). It also competes with all the known accounting integrations that many other payment companies offer (e.g. TransferMate, TransferWise, WorldFirst with Xero, Sage, Quickbooks).

Bill.com says it has processed around $500m in international payments to date, having only launched a year ago. Expect this number to grow substantially as it wins share from the FX-only incumbents.