I’m in San Francisco this week visiting some of our great clients in the space (Bill.com, OFX, Ripple) and meeting with some very innovative prospects.

San Francisco is also home of the venture capitalist and in the last five years, a lot of smart money has gone into the payments sector. We’ve analysed who has been investing where and found some interesting patterns. 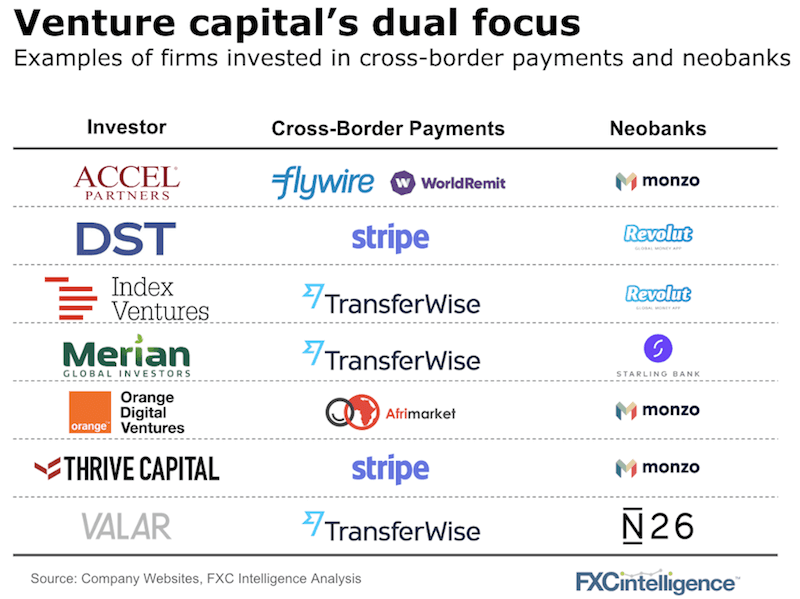 We found the overlap of investors in cross-border payments and the new neobanks interesting. Two core observations:

Which means if you’ve spotted an investor who only owns a stake in a neobank or a cross-border payments company, this could be the time to pitch them to invest in the other, especially if it’s your company!

In mid-April, we looked at the reasons why Facebook decided to pull its messenger P2P money transfer product. This is what we wrote on why Facebook canned the product: 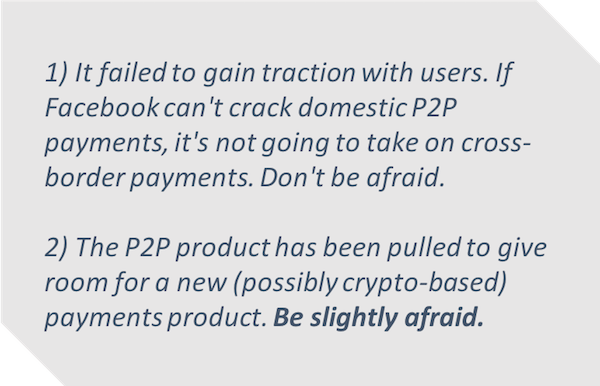 Turns out we might have understated things. What we now know:

There has been no official announcement. Rather, a series of stories, led by the BBC this past week but also the Wall Street Journal and Bloomberg, offering tid-bits of insight.

Likely much more to come on this front – we’ll be watching and dissecting on your behalf.

Not wanting to feel left out, Global Payments agreed this week to acquire TSYS for $21.5bn driving further consolidation in the processing space.

This follow FIS’ $43bn deal to acquire Worldpay in March, and Fiserv’s $22bn acquisition of First Data in January.

What is driving these mergers:

Against this background, we’ve also seen record fundraising in the processing space led by Checkout.com’s $230m. To catch up, a few million here or these isn’t going to cut it and Stripe, PayPal, Adyen and Square are no longer small fish.