Let’s bring you up to speed with the various blockchain and crypto currency offerings that have come onto the market. Plenty of ideas and lots of claims of problems to be solved. What’s really going on? 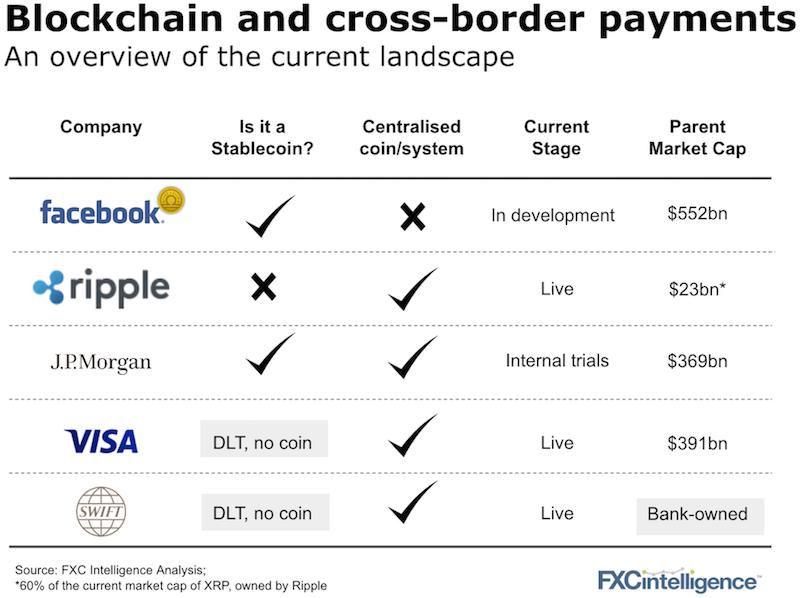 These companies have been trying to solve for some common issues:

Of the group above, Ripple has been the most focused, working to provide an alternative to Swift, the banking messaging cooperative owned by the banks. Ripple’s CTO has recently acknowledged the challenge of convincing banks in the space to adopt its solutions. Where Ripple is gaining more traction is with the payment companies, its biggest deal yet being its $50m investment last month into MoneyGram.

All the other players above are much further behind the curve but have substantial resource behind them. None more so than Facebook’s Libra project (which we covered here) but just yesterday was asked by the US Congress to pause development whilst the government investigates further. As the recent shuttering of JP Morgan’s digital bank Finn shows too, resource of a corporate parent is absolutely no guarantee of success launching new products.

Is Western Union sitting on the most valuable asset of this group?

At a recent conference, Hikmet Ersek, Western Union’s CEO made the following statement when asked about the impact of blockchain: “We [WU] have our own settlement system…today with our test, it is five times more expensive with a crypto currency or a stable currency.”

The issues the companies above are trying to solve – working capital, lack of currency liquidity and speed are all issues Western Union has already predominantly solved for – it just doesn’t get much credit for it.

Which means if Western Union really is five times cheaper than the blockchain alternatives and with c.$300bn of annual flow, shouldn’t Western Union simply be selling access to more of its rails? The recent Amazon deal suggests it is doing just that.