HOME >> General
Last month, Transferwise announced that they are on track for profitability in 2017. Many banks and payment companies didn’t think they’d make this milestone. We believe two misinterpreted data points, in particular, fueled this view. 1) Transferwise’s publishing last December their financial results to March 2016. Their accounts revealed a record loss of £17m ($25m), up from £11m ($16m) the year before 2) Transferwise “only” raised £17.3 ($26m) in May 2016, compared to the previous raise of £39m ($58m) in January 2015 We spoke with Transferwise this week to get a more detailed look at their story.

The Evolution of Transferwise as a Payments Company

In 2016, our Intelligence Team produced our comprehensive Money Transfer Report that examined the past and future of the money transfer industry. A major focus of our report was the potential for profitability for some of the startups – including Transferwise. Transferwise’s profitability represents a huge milestone not just for Transferwise, but for the industry in general. If you look at the chart below (relevant until a week ago), it’s easy to see how the hockey-stick shape recovery could have been hard to predict. 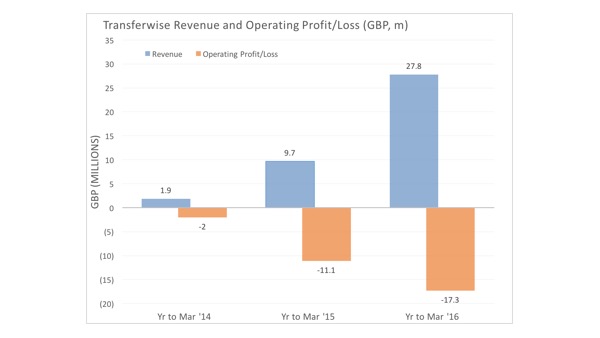 As we add a year to the chart above, we can see that Transferwise has managed to reach where few startups do – and yes, that includes many unicorns – profit. 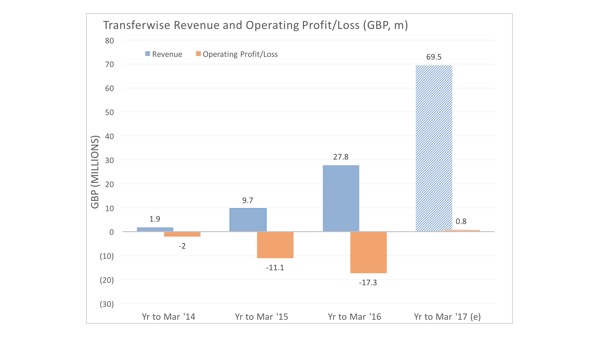 To have reached profitability, we can say a few things.

Transferwises’s cost of customer acquisition has declined as they have benefited from scale. Back in early 2015, Transferwise’s awareness in the UK was little more than their competitors, but now, Transferwise shared with us – “Our single biggest growth channel is word of mouth – that’s people recommending us to their friends, family or to their customers.”

Customer retention and churn rates will be strong. With a full suite of mobile and online offerings – and prices lower than most of the market – there are fewer reasons for people to switch to an alternate provider once Transferwise has convinced them to move over. On this customer behavior, Transferwise noted – “Our biggest challenge is overcoming the apathy most of us have when it comes to changing our own behaviours. Many people know that their bank isn’t giving them good service, but either don’t know where else to look or think it will be too much of a hassle.”

The future for international payments…facing the banks head on

Transferwise started out as a bank alternative focused solely on international money transfers, but their offerings are now beginning to emulate that of the big banks – albeit with a very different approach. They have built a trusted financial brand (one million active users confirms that) and have this week taken the next step with their product – a multi-currency account called the Borderless account. Transferwise launched their borderless account – an account specifically meant to be used by international people and businesses as an alternative to a traditional banking multi-currency account. As we discussed in last week’s newsletter, multi-currency accounts are notoriously challenging for SMEs to open, and Transferwise clearly sees a way to address this need. As of now, Transferwise confirmed to us there is no plan to offer interest bearing deposit accounts, but if customers start to hold funds for extended periods in these accounts, that request may come in. Additionally, it is easy to see how a lending offering could be added in – there are many standalone fintech SME lending platforms already performing strongly. So what might you call a financial services company that offers payments, multi-currency accounts and potentially loans…
+
Schedule a Demo
Call us at +44 207 871 5565 (UK/Europe) or +1 212 600 8553 (North America) or email demo@fxcintel.com for a demo.
+
Schedule a Demo
We use cookies at fxcintel.com so that you get the best user experience. If you continue to use our website we will take this as meaning that you agree to our use of cookies. If you want to find out more about cookies please see our cookie policy.
+
Subscribe to the smartest international payments newsletter in the industry