FXC Intelligence Founder and CEO Daniel Webber sat down with Michael Kent, Co-Founder and CEO of Azimo. Below are some of the highlights of the discussion DW: What is Azimo looking at in the next five years? Michael: If you think back to being a small child and grabbing your parents hand and walking down High Street in all likelihood you probably walked past a bookseller, you probably walked past a travel agent, and those businesses just don’t exist on High Street anymore. I think it’s pretty common knowledge that financial services is lagging behind the rest of industry in terms of adoption of digital services, but in five years time, there’s not going to be any Western Union, there’s not going to be any Moneygram outlets. Everyone is going to be sending money digitally. And our expectation and our vision for that is as one of the providers that people choose to use. DW: What about cash out problems in difficult places? How will you solve for that? Michael: We offer 250,000 cash-out points all over the world. And they are very important in some parts of the world, and very unimportant in others. For example, a case that is close to my heart is Sierra Leonne, one of the poorest countries in the world and an ex-British colony. We have, cash-out points throughout Sierra Leonne. In the Philippines, we have about 10,000 cash out locations. And we get those locations by partnering with local financial institutions in those markets. So to answer your question, we build that network. But we also have is, we have a digital wallet network so we can pay into digital wallets, things like M Pesa, things like MTM wallets, which is slowly getting traction, it’s early days for that kind of technology. We offer home delivery in certain markets, we offer local payments into bank accounts, and then we offer very large hard currency payments using cross money banking or SWIFT. We do a pretty broad range of settlement options, because of course, sending money is a distressed purchase, it’s not something you do because you want to. You don’t derive any satisfaction from sending money overseas, you do it to do something. DW: What would you say is the key international market for Azimo? Michael: So we have less of a specific focus as some of the other guys, particularly guys in the US. In the US, it’s all about some very big, obvious markets – Mexico, India, the Philippines. We do have key markets for us – Poland, the Philippines, China, West Africa – Nigeria, Ghana, Senegal, Cote d’Ivoire, particularly from France, South Africa, and none of those markets are more than 10% of our flow, so our market – portfolio like – is spread throughout a lot of different markets out there. DW: Can you share some insight on where you’re going? New send from places, as well as the receiving end. Michael: So in terms of send, the corridors that are growing fastest are from Europe. Germany, France, Spain, the Netherlands, Austria, big markets for us. DW: How do you think about expansion? Michael: So we really think about solving problems. We think about service, and are we are able to parter with someone who provides a great service, which means fast, commercially attractive for us and for the customer versus what’s in the incumbent market. Germany, for example, is one of the most expensive markets in the world, over ten percent to send a 200 dollar money transfer – Germany is a market where we can do a lot of stuff. So we look at, can we solve a problem with one of our partners, is there a big enough market there to go after? Some of these places are incredibly niche. We put it out there and see if people want to use it. So what we see, in terms of development is, we have a great service, people start using it, the cost of activation, which is something we track quite closely, tends to start out high, and it scales down very fast. Because, actually, the largest single channel that our customers come in from is the word of mouth, or referral. So it’s not, in that sense it’s a great business, because we aren’t telling people to use it, we are getting other customers to tell people to use it. I’m also overly surprised just how sticky customers are. Customers know that the money is available rapidly and at a good price – so they stick around. 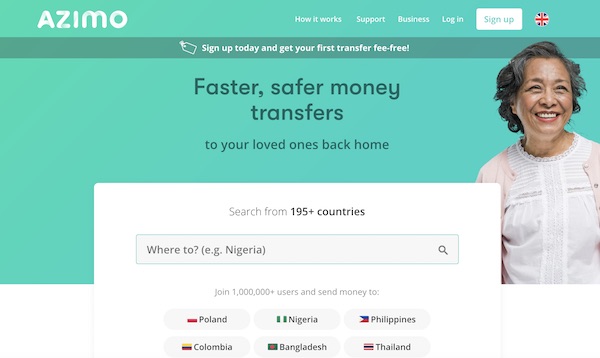