HOME >> Comparison
Moneygram released their 2018 Q1 results earlier this week and it doesn’t make for kind reading. Since the failed bid from Ant Financial, MoneyGram has lost much of its value and in the past three days, the stock fell another 25% taking it back to where it was pre-bid. What’s going on and what can we learn for the sector more broadly? 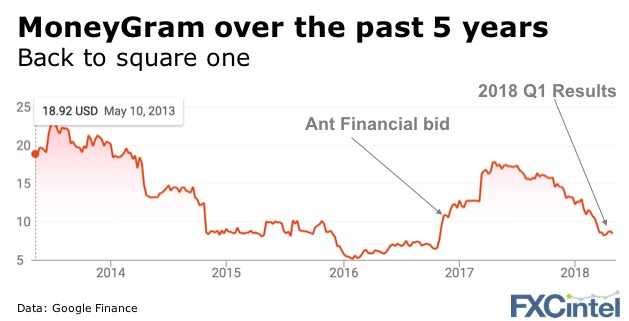 Some observations: Which leaves the obvious question – what’s next for MoneyGram? Can the business turn itself around and compete? Its digital revenue is only around $50m making it smaller than many of the new fintechs in the space. Since Western Union has shown no appetite for MoneyGram does that leave only Ria?

12 years ago, MoneyGram was at its peak. It cost $286 to buy a share (it now costs $6.5/share). Revenue back in Q1 2006 wasn’t far off what it is now but the business was worth 35 times more. In 2006, MoneyGram had the potential to be any of the digital players we see today. A few lessons can be learned from this week’s comments from MoneyGram’s CEO: Making data an asset in your business is not a cost free exercise. Just talk to your compliance department and anyone on an internal GDPR committee. But most businesses know that truly understanding your customer can pay big rewards. “The more I [MoneyGram] can collect about consumers, the more information they are willing to give us, the easier it is to authenticate, easier it is to communicate with them, and easier it is to effectuate our business from a risk reward perspective over the long-term”  -W. Alexander Holmes, MoneyGram CEO Two weeks ago, Nick Day, CEO of Small World Financial Services shared with us the value of having a smaller network of physical locations for brand building. MoneyGram accepted this week that maybe this benefit for them has now been exhausted: “I think probably 10 years ago I think my view was a little bit different, right. It was a marketing opportunity being assigned to promote your brand and get out there in the market. But I think the world has changed quite a bit.” W. Alexander Holmes, MoneyGram CEO Clearly this is not news to anyone. But how much of a premium can MoneyGram’s brand sustain if any at all? The Blockbuster & Netflix story reminds us of one truth for business. When you are out in front and one the leaders in the market, you still can’t rest on your laurels. Fintechs take note, someone out there is trying to disrupt the very business you just disrupted.
+
Schedule a Demo
Call us at +44 207 871 5565 (UK/Europe) or +1 212 600 8553 (North America) or email demo@fxcintel.com for a demo.
+
Schedule a Demo
We use cookies at fxcintel.com so that you get the best user experience. If you continue to use our website we will take this as meaning that you agree to our use of cookies. If you want to find out more about cookies please see our cookie policy.
+
Subscribe to the smartest international payments newsletter in the industry