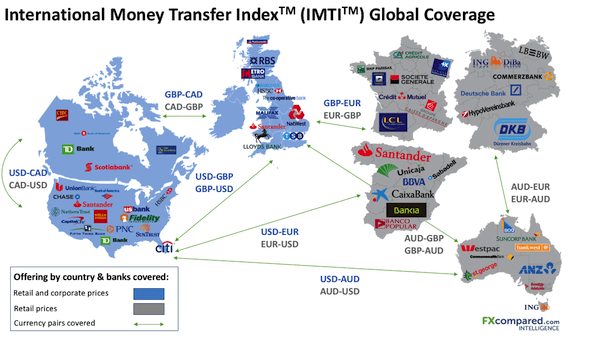 FXCintel builds the IMTI monthly by collecting offered bank fees and foreign exchange rates through mystery shopping. Shoppers inquire about transactions ranging from small, remittance-type numbers ($1000 USD) to large, corporate numbers ($250,000 USD+). The IMTI number is a weighted average that reflects that various sizes of institutions that exist within the market. Banks’ offered rates for international money transfers vary widely across countries and transaction sizes. Below, we have provided a fully worked example.

The table above provides the cost to customers transferring GPB 1000 from various UK banks to France, requiring a conversion to Euros. The data reflects May 2016. This data was collected from each bank via telephone, and the interbank FX rate was noted at the same time as each quote. To calculate the “full cost” between fees and exchange rate, the following methodology was used – The ‘full cost’ to the sender is the fee of GBP25 + FX cost of GBP28 = GBP53 The full cost in percent is GBP53 / GBP1000 X 100 = 5.3%
+
Schedule a Demo
Call us at +44 207 871 5565 (UK/Europe) or +1 212 600 8553 (North America) or email demo@fxcintel.com for a demo.
+
Schedule a Demo
We use cookies at fxcintel.com so that you get the best user experience. If you continue to use our website we will take this as meaning that you agree to our use of cookies. If you want to find out more about cookies please see our cookie policy.
+
Subscribe to the smartest international payments newsletter in the industry